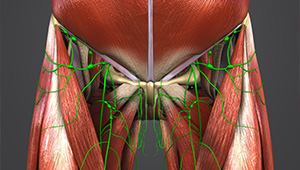 Symptoms may include catastrophic pain syndrome from nerve damage.

Pelvic organ prolapse was surgically treated in thousands of women with the Prolift device marketed by Ethicon, Inc. despite a lack of long-term follow up studies

regarding safety. The results are foreseeable as now there are thousands of women with chronic neuromuscular problems including hip adductor myalgia (groin pain), pudendal neuralgia, obturator neuralgia, and complex regional pain syndrome.

The Prolift device used for anterior compartment repair is different compared to the Pinnacle and Uphold devices produced by Boston Scientific, Inc. used for anterior prolapse in that the four arms of the Prolift that anchor the device are placed through the obturator membrane and pierce the hip adductor muscles and the obturator internis muscle. This will cause chronic hip adductor myalgia, but overtime may cause catastrophic pain syndrome from nerve damage. The Boston Scientific devices Pinnacle and Uphold device implant directly into the sacrospinous ligament which tend to cause acute or direct pudendal nerve injuries because the pudendal nerve runs adjacent to or behind the sacrospinous ligament.

Dr. Greg Vigna, practicing physician, national pharmaceutical injury attorney, and damages expert states, “The clinical outcomes from the Prolift is foreseeable by their design and have played out in the literature in that there may be anatomic success with supporting prolapsed organs. The neuromuscular injuries are numerous.”

Dr. Marc Possover, world authority on mesh related neurological complications in Europe, in 2011 published an observational study of 95 patients who presented to him with neurological issues from prolapse surgery. Five patients presented with pudendal neuralgia from pudendal nerve injury from transobturator slings and these patients presented with delayed pain, months to years after implantation. Similarly, complications from the Prolift were related to injuries to the sacral plexus and/or obturator nerve, along with pudendal pain, with 11 out of 13 patients with delayed onset of pain.

Dr. Vigna states, “I have concerns that women with the Prolift and the transobturator sling devices have had severe pain in the hips related to hip adductor myalgia for years from direct muscle damage and when their pain changes as the device contracts pulling on nerves causing injuries such as pudendal neuralgia and/or obturator neuralgia, they are not being diagnosed and treated appropriately. Future care for hip adductor myalgia is oral medications and physical therapy, in contrast to nerve related complications that require complete mesh removal, decompressive nerve surgery, neuromodulation, physical therapy, and Botox.”