Transobturator Slings: End of the Road

Transobturator sling design requires blind placement of the device which puts neurological structures in peril to direct injury during placement or overtime. 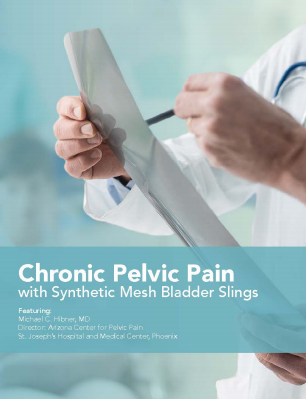 Ten-years ago, the controversy among urogynecologist was if the Ethicon TVT-O (inside to out procedure) was safer as it relates to injury to the neurovascular structures in the obturator fossa compared to the American Medical System Monarc and the Coloplast Aris sling (outside to in). Now, much has changed as the controversy among urogynecologist is when the transobturator sling will be banned by the FDA, because the neuromuscular complications caused by the transobturator slings appear to be ten-times that of the retropubic slings.

Synthetic polypropylene slings used in the treatment of stress urinary incontinence (SUI) include the retropubic sling, transobturator sling, and mini-slings. Each design requires blind placement of the device which puts neurological structures in peril to direct injury during placement or to injury overtime as the device contracts under tension. The specific neurological injuries suffered by women is the result of the design of the device and the blind procedure required for its placement.

Transobturator slings acutely and overtime may cause injury to the obturator nerve which may cause obturator neuralgia that produces symptoms of burning and allodynia in the distribution of the obturator nerve. Women will have complaints of thigh weakness and groin pain. Overtime dyspareunia and vaginal pain may develop as Complex Regional Pain Syndrome Type 1 and is common in women with obturator neuralgia. Overtime, the obturator internis spasma in response to the arms of the mesh piercing its muscle belly and putting the muscle under tension as the arms of the mesh adhere to the inferior pubic rami bone. Spasm and progressive scarring of the obturator internis muscle will cause tension or compression on the pudendal nerve causing symptoms consistent with pudendal neuralgia. As desperate women with pudendal neuralgia undergo pudendal nerve decompression, it is not uncommon to have operative reports indicating scarred down pudendal nerves adhering to the dorsal surface of the sacrospinous ligament.

Retropubic slings acutely may cause pudendal neuralgia by direct damage to the pudendal nerve branch to the clitoris. These women may have hyperarousal symptoms associated with severe clitoris pain. Overtime women may develop Complex Regional Pain Syndrome Type 1 causing dyspareunia, interstitial cystitis, vulvodynia, and severe pelvic floor spasms. Retropubic slings may cause acute ilioinguinal neuralgia from direct injury to the ilioinguinal nerve as there are normal anatomical variations among women that may take the course of the nerve more medial and may be directly injured by a properly placed sling. Ilioinguinal neuralgia cause pain and burning in the region of the labia majora and groin and overtime these women may develop Complex Regional Pain Syndrome Type 1. Retropubic slings are designed to be tension free but unfortunately that is not the case as the arms often become densely adhered to the pubic bone which will create tension and overtime as the polypropylene device shrink; the result of which will be increasing spasms of the levator muscle. The result is pelvic floor muscle spasm which may cause dyspareunia, interstitial cystitis, and Complex Regional Pain Syndrome Type 1.

For more information on Neurological Complications of Slings read our Free eBook.

For articles, videos, and other valuable resources, visit https://tvm.lifecare123.com/ or our Pudendal Education Portal, https://pudendalportal.lifecare123.com/. We can also be reached at 800-761-9206.