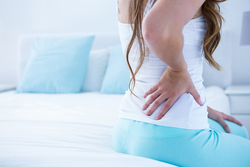 There is little help in the way of literature that provides guidance to women who suffer from chronic pelvic pain. Not only is the literature sparse, it is inaccurate. Most literature on pelvic pain, in fact, pays little attention to the nerves in the pelvis. From my review of the literature, most articles completely ignore the pelvic nerves as the source of pain in the female pelvis. Pelvic pain secondary to nerve injury has become increasingly recognized by the medical community as a pain generator in the pelvis because of the frequency of documented nerve damage in the transvaginal mesh population.

The medical journal “Up to Date” describes myofascial pelvic pain syndrome (MPPS) “as a disorder in which pelvic pain is attributed to short, tight, tender pelvic floor muscles, usually with hypersensitive trigger points.” These trigger points when pressed will cause pain that radiates. The article describes that the pain may occur in the pelvis, vagina, vulva, rectum, or bladder. “Up to Date” describes MPPS as having urinary symptoms such as pain, frequency of urination, and a sensation of incomplete emptying. Other described symptoms include a sensation of rectal fullness and pain with sexual intercourse.

“Up to Date”, in its description of the differential diagnosis, fails to acknowledge nerve compression as a contributor or cause of myofascial pain. Contrarily, pudendal neuralgia does exist. The pudendal nerve arises from the spine (S2-4), enters the pelvis and has three terminal branches. These terminal branches can be damaged together, or in isolation by a variety of problems, including the transvaginal mesh procedure. The symptoms of pudendal neuralgia are well described. Pain is predominately while sitting, anorectal pain, sexual dysfunction, and in severe cases, incontinence. There may be frequency with urination, sensation of incomplete emptying of both bowel and bladder, and pain with sexual intercourse. These symptoms can mirror the symptoms of MPPS as described above. The nerve damage that occurs in pudendal neuralgia may be the actual cause of the myofascial pain in which case, I would regard the myofascial pain as secondary (to the nerve damage).

The primary vs. secondary myofascial pain that I am discussing is not a new concept, but one that is well described in rehabilitation literature. When clinicians who care for patients with pelvic pain begin analyzing the pain generators and begin treating myofascial pain as primary or secondary, then there may be a viable solution to the suffering caused by the transvaginal mesh complications.